This will be Netflix’s Korean original series. It is adapted from the web comic series Land of the Gods. Which was authored Writer Kim Eun Hee. It’s planned for three seasons.

10 days have passed since the King collapsed from an illness. Queen Jo (Kim Hye-Jun) and her father Chief State Councilor Jo Hak-Joo (Ryoo Seung-Ryong) have forbidden anyone else to see the King. Even his own son Crown Prince Lee Chang (Ju Ji-Hoon) is forbidden to see his father. In the meantime, Chief State Councilor Jo Hak-Joo rules Joseon with an iron fist, but rumors spread that the King is dead.

Crown Prince Lee Chang senses something sinister and sneaks into the King’s palace. He sees a shadowy monster through a door and smells its foul stench, but he is discovered and escorted out of the palace. His guard Moo-Young (Kim Sang-Ho) steals the medical journal for the King. The journal is nearly empty, but lists the name of Physician Lee Seung-Hui (Kwon Bum-Taek). To find out what happened to the King, Crown Prince Lee Chang and Moo-Young travel to the Jiyulheon clinic in faraway Dongnae to see the physician. When they arrive, they discover that the clinic is in ruins and dead bodies are found under a building. Crown Prince Lee Chang and Moo-Young later learn that the only person to have survived the clinic is medical staff member Seo-Bi (Bae Doo-Na). When they finally find Seo-Bi, she tells the them that the dead they saw at the clinic are not dead and they will rise up soon to kill. 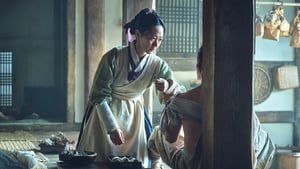